Stand Up! Speak Out! 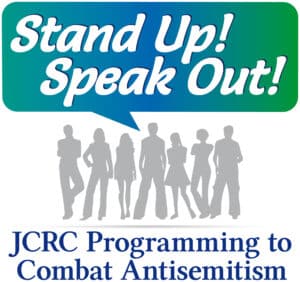 What is the challenge?

Antisemitism is often referred to as “the longest hatred.”  We have been fighting it for thousands of years; it ebbs and flows, and changes “outfits” every few hundred years.  While the Jewish community has always known antisemitism, we find ourselves today confronting it in ways we’ve not witnessed in nearly two generations.

The Indianapolis JCRC has tracked a precipitous increase in local incidents of antisemitism in recent years, supporting more and more families whose children have been targeted; responding to reports of swastikas or Nazi imagery (including the most recent attack on Congregation Shaarey Tefilla); working alongside teachers and administrators to implement anti-bias workshops; and recording over 65 anti-Israel events in Indiana, with boycott resolutions on three college campuses.

The 2017 demographic survey of the Indianapolis Jewish community (conducted by the Jewish Federation of Greater Indianapolis) found that nearly one-third of Jewish youth (ages 6-17) have personally experienced Antisemitism in the past year, making Indianapolis the third-highest reported city out of 27 Jewish communities surveyed.

What is the JCRC’s strategy to address the increase in antisemitism?

The JCRC is shifting our approach from reacting to individual incidents, to include proactive outreach, programming, education, and training to help prepare young people (and their families) for the realities of 21st-century antisemitism in all its forms.  JCRC has hired a new full-time professional, Marla Topiol, to be our community’s Israel & Antisemitism Education Coordinator and oversee the implementation of our new Stand Up! Speak Out! program initiative.

Stand Up! Speak Out!

A program with a 25-year history of success initiated by the St. Louis JCRC, the Indy JCRC is now offering this program, which trains Jewish teens to give joint presentations about what it’s like to be Jewish in high school classrooms without a Jewish presence.  Student to Student offers an indispensable opportunity to have non-Jewish students learn about other teens who might be different from themselves by listening and asking questions to peers their own age.

JCRC partners with the Institute for Curriculum Services to provide free curricular resources, lesson plans (common-core aligned), and workshops for 6th-12th grade teachers on how to teach accurately about Jews, Judaism, Jewish history, Israel, and the Arab-Israeli conflict.

This application-based program engages Jewish high school students who are eager for an intensive learning, 8-session seminar, on Jewish history, antisemitism, and Israel.

The ADL has trained JCRC staff to be able to facilitate this proven ADL workshop, which is an interactive education program for youth, young adults, and their adult families members designed to empower and equip the Jewish community with constructive and effective responses to combat antisemitism and anti-Israel bias

If you would like more information about any of our Stand Up! Speak Out! programs, please click on the tab to the left, or reach out directly to Marla at mtopiol@indyjcrc.org.

Launching this comprehensive initiative would not be possible without the financial support of donors.  If you would like to help the JCRC combat antisemitism and support our Stand Up! Speak Out! initiative, please choose the “Combatting Antisemitism Fund” from the drop-down menu.