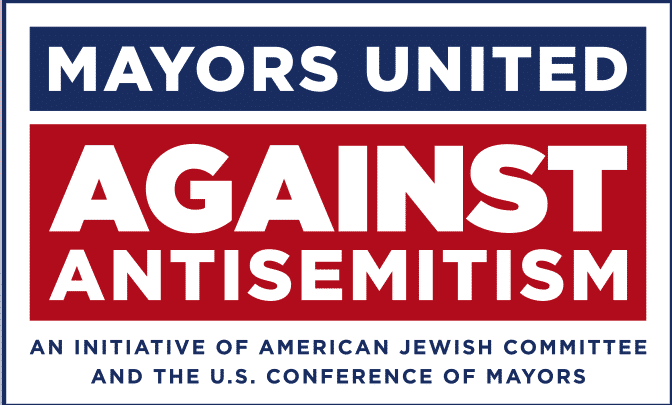 JCRC is supporting an important initiative of the U.S. Conference of Mayors and the American Jewish Committee (AJC), which is securing the signatures of hundreds of mayors and municipal leaders across the country who have declared that antisemitism is unequivocally incompatible with the democratic values that are at the bedrock of our society.

The joint initiative calls on mayors across the country to sign the statement below about the need to combat antisemitism.

Urge Your Mayor To Combat Antisemitism

Five years ago, U.S. mayors from all fifty states issued a call to action to combat antisemitism in Europe. Not alone in their concern, mayors from across Europe joined in the fight and signed onto the pledge.

Since then, vicious attacks on American soil have demonstrated that antisemitism must be confronted with the same urgency in the United States. In October 2018, eleven Jews were killed in the deadliest attack against the Jewish community in U.S. history at the Tree of Life Synagogue in Pittsburgh, Pennsylvania. Jews have also been murdered in Poway, California; Jersey City, New Jersey; and Monsey, New York simply for being Jews. We witnessed chants of “Jews will not replace us” in Charlottesville and “Camp Auschwitz” and other antisemitic messages displayed during the assault on the U.S. Capitol.

According to the FBI 2019 Hate Crimes Statistics, American Jews—who make up less than 2% of the American population—were the victims of 60.2% of anti-religious hate crimes.

And so we gather again, as leaders of our cities and communities, to jointly say:

We, the undersigned Mayors, express our deep conviction that antisemitism is not only an attack on Jews but an assault on the core values of any democratic and pluralistic society.

In a world of global communications, where antisemitic ideas spread rapidly, a concerted and principled response is required to raise awareness, to educate, and to ensure decency prevails. As Mayors and municipal leaders, we have a unique responsibility to speak out against the growing menace of antisemitism by affirming the following:

We, therefore, commit to working within and across our communities to advance the values of respectful coexistence. We call upon mayors, municipal leaders, and other elected officials in the United States and around the world—and all people of good faith—to join us in declaring unequivocally that antisemitism is incompatible with fundamental democratic values.

THIS IS AN INITIATIVE OF AMERICAN JEWISH COMMITTEE (AJC) AND THE U.S. CONFERENCE OF MAYORS (USCM).

Indiana Mayors Who Have Joined: